This is the third installment in a Sacramento Bee series on local food insecurity. The first and second parts are available to read online.

The crops aren’t planted in perfect rows in the side yard of her Oak Park home. The tomatoes are tucked between bright sunflowers. Cucumbers grow next to eggplants and peppers. She had to cut back her rosemary bush because it was starting to take over.

But White said growing her own food over the last five years or so has been both fulfilling and empowering. She and her husband watch their young children eagerly devour salads. They save money each season as vegetables ripen on the vine. Neighbors walk by and chat with her as she tends to her berry bushes.

“It’s just been amazing,” White said, who regularly takes her kids to the Fruitridge Community Collaborative Garden to pick plums and apricots. “When we first came to Sacramento, we were broke, so we were really relying on the food we were growing and the access to the community gardens.”

During the pandemic, gardening and plant care exploded in popularity, as people cooped up at home looked to bring life into their apartments and backyards. It’s a trend that appears to not let up, with some seed sellers reporting ongoing demand.

And in Sacramento, urban farmers and community advocates have dived head-first into encouraging families and residents to grow their own produce and share their successes — particularly those living in neighborhoods where food insecurity may be more prevalent.

Farmers connecting with the community

When White first moved to Sacramento from the Bay Area, she knew she wanted to start a garden to have a deeper connection with the food she and her family ate, and save money on groceries. But she didn’t know exactly how to start.

Lucky for White, just down the street Chanowk and Judith Yisrael run the Yisrael Family Farm, a half-acre plot that has been operating for more than a decade as a hub for food, health and community empowerment in South Oak Park.

Spreading the joy of gardening and cooking fresh foods not only helps underserved Oak Park residents become self-sufficient, Chanowk Yisrael said, but it also helps them get connected to their fellow neighbors for community organizing.

In addition to getting White’s garden started with herbs, turnips, red lettuce and more, Yisrael Family Farm has been able to build about 40 new gardens as part of a free program funded by the California Endowment.

“We had a guy from Persia, and moving to Sacramento, you know it’s got a Mediterranean climate, he was stoked to be able to put in things like olive and pomegranate trees,” he said.

That has meant the farm can serve even renters in Oak Park who may be more cost-burdened, or who may not have permission from a landlord to create a garden directly in the soil.

Making gardening and urban farming more accessible is a passion for Malik. First inspired when she was in the school garden program at Grant High School, she’s been an advocate for creating more green spaces particularly in Sacramento’s underserved neighborhoods like North Sacramento.

She helps run two community gardens — Root Cellar Community Garden, at 3630 Marysville Blvd. and Suga’ Cane Community Garden, located at 3801 Vern Street — where residents can grow on plots for free, growing vegetables for themselves and their neighbors.

“We have a lot of challenges in Del Paso Heights, and one of them definitely is poverty,” Malik said, “and for that reason we provide the opportunity for no cost.”

Down in Oak Park, nonprofit Alchemist CDC — which currently runs the Oak Park Sol Community Garden — is planning to open another community garden on Pansy Avenue by this fall.

Neighborhood empowerment program manager Joe Robustelli said the organization is accepting people on the interest list for plot assignments, and is being mindful to ensure the community garden’s users reflect the diversity and needs of Oak Park residents. He’s also looking to reduce the user fees in the future to make the renting a plot at the gardens more accessible.

“If you live in an apartment and live close by, I’m going to try to get you a plot because you don’t have other options,” Robustelli said.

Growing your own food can impact your health

Though urban farms and home gardens aren’t necessarily a panacea for the systemic issue of food insecurity affecting tens of thousands of Sacramentans, research has found that they can make meaningful impacts on the health and wellbeing of residents at the neighborhood level.

It’s a model that’s taking shape in the form of a new grassroots community effort called Tanama Garden, a new urban farm on 12th Avenue just off Stockton Boulevard that has taken shape on a formerly vacant lot just in the last three months.

Named after the word for “butterfly” in Taíno, community members have planted everything from zucchinis and corn to avocado and nut trees. The urban garden is being designed by Oak Park resident Alex Hoang, who runs the nearby chicken composting station, the Oak Park Eggery.

It’s created a seamless and sustainable system where residents and businesses can bring food scraps for chicken feed or composting at the Eggery, and then the nutrient rich soil can be brought over to Tanama Garden for use.

“It was an empty lot for 30 years … and now it’s a food hub,” Hoang said of the garden. “People will take their kids and walk by the Eggery and drop off food waste, then head over to Tanama and grab some veggies.”

Unsustainable factory farming is degrading the environment, Hoang said. “Growing food in our city at human-scale … is not just good but required if we’re going to repair our plant,” Hoang said.

“We have over 200 empty lots in Oak Park,” Hoang said. “If they were all community gardens and composting parks, that’d make a huge dent.”

Hoang hopes to one day see the two lots scale up, creating a community-run cooperative that includes a commercial kitchen, playgrounds, a community tool shed, workshops and more for Oak Park residents.

But teaching residents how to garden and cook healthy meals at home are also important ancillary pieces in the overall mission to building healthier communities, he said.

“Because we’re a relatively small farm, we definitely grow a lot of food (but) we can only make a tiny impact on the overall need,” he said. “So our goal is, ‘How can we impact a smaller number of people, but stay with them for a longer period of time and understand their needs?’ ”

This summer, Soil Born Farms is starting a pilot wrap-around food program that will work with ten families. Each week the family will get a box of food from Soil Born Farms, and receive classes on cooking healthy meals, gardening at home, and diet-related health issues.

Rather than one-off lessons, the Healthy Families program, run in partnership with Kaiser Permanente and United Natural Foods, will be “going deeper with a smaller number of folks.”

“It really does help people become self-sufficient and take power,” he said.

It’s a sentiment White agrees with. She recalls how years ago, while working with low-income high schoolers in Oakland, she realized the students found the fresh foods they had grown in the school garden unappetizing.

“They were afraid of apples, they rather eat Cheetos,” she said. “I remember one of them said, ‘Apples are dirty.’ That stuck with me.”

She understands the feeling that gardening and urban farming can feel inaccessible to low-income families or residents of color. But looking at her garden, weeds and all, she feels that she has a responsibility to have a better relationship with the earth.

“Especially for people of color, it’s ancestral. It’s something we have to do to heal ourselves,” she said. “I know it’s a white space, but we have to put ourselves in those spaces and claim that space. It’s our heritage.”

Alexandra Yoon-Hendricks covers equity issues in the Sacramento region. She’s previously worked at The New York Times and NPR, and is a former Bee intern. She graduated from UC Berkeley, where she was the managing editor of The Daily Californian.
Support my work with a digital subscription 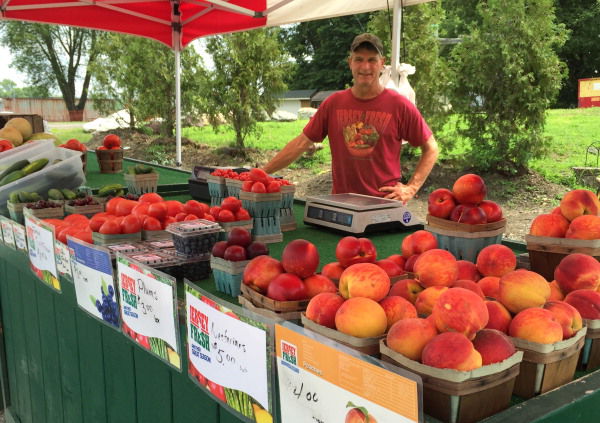